Navigating Tensions at the EFL

There’s never a bad time for the Energy Futures Lab to meet, but the gathering in February in Cochrane was particularly timely. In the wake of Teck Resources’s decision not to proceed with its Frontier Oil Sands project, and in the shadow of both a national conversation over Coastal GasLink and Indigenous rights and a growing provincial one about the merits of separation from Canada, the time was right to ask some tough questions.

Things would get even crazier in the days that followed, as oil prices collapsed under the weight of a renewed price war between OPEC, Russia, and the US shale industry, and the provincial government scrambled to react. Winston Churchill famously said that you should never let a good crisis go to waste, and this one seems perfectly aligned with the EFL’s vision and purpose. If the EFL can’t ask the tough questions about our energy future now, when can we?

That said, nobody should expect any easy answers to emerge — and they certainly didn’t from the session in Cochrane. That’s why, instead of a tidy summary of the clear-cut answers that were generated during that day, we’re left with a new list of questions that need to be grappled with. These questions get at the heart of our energy dialogue in Alberta, and they may be useful in both moving past partisanship and building a more productive dialogue in this province. If there’s a group that can ask them, it’s the EFL.

First, though, there were some points of agreement to build on. Most importantly, there was consensus that polarization sucks — a belief that’s built into the Lab’s DNA. And there was agreement that it’s not enough to dismiss or decry polarization, given that there are people and organizations who both benefit from polarization and routinely seek to exploit and expand it. The challenge for the Lab is figuring out a way to operate in that environment.

Second, there was agreement that partisanship is a problem. Some thought it was a problem worth looking past, or trying to work around, while others believed it was better to engage directly with the system. But everyone agreed that it was a force to be reckoned with — and that the failure to do so would inevitably get in the way of the EFL’s mission.

And third, there was a consensus that language matters, and that the words we use and the way we frame things publicly has a major impact on how they’re understood and experienced by others. Using the word “transformation”, for example, in place of “transition” can make the concept more approachable for many people. The Alberta Narratives Project covered this subject in much greater detail, and it’s a resource that anyone who is in the habit of discussing energy and climate issues should keep handy at all times. 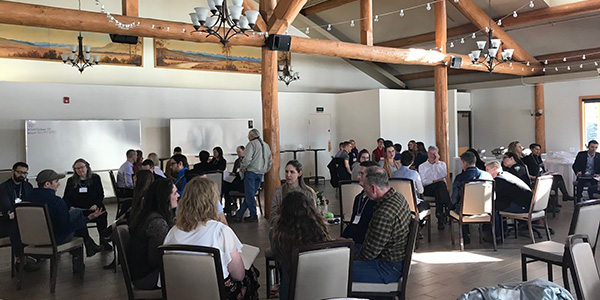 There was also agreement that we need to find common ground on this issue, but what that common ground looks like is up for debate. After all, where and what that common ground is shifts based on the questions in play and the people involved. Some have common ground on economic security, for example, while others find it on health outcomes. And while concepts like “human flourishing” might sound and seem like they have universal appeal, even they can be problematic. After all, one person’s human flourishing may involve the oil and gas industry being more active and prosperous — and that directly impacts another’s concept of flourishing in a negative way. The search for common values is similarly challenging. After all, if efforts to find shared values activate our tribal identities as either progressives or conservatives, are they a pathway to a more productive conversation or a trigger that pushes people back to a partisan one?

More than anything, what the day in Cochrane revealed is that for all the technical and wonkish aspects of this conversation, it’s really much deeper than that. It’s about our identities, our histories, and how those sit in the world, as well as the tensions those all create. As with many things in Alberta, the real value is beneath the surface.

What do those tensions look like? Here are five that came to the fore.

Does the EFL speak to people on the basis of their fears — be it for their own economic interests or the futures of their children and grandchildren — or their sense of the opportunities that may lie ahead in the energy transition?

Should the EFL lean into the complexity of the conversation, and focus on the nitty gritty of policy proposals and technical solutions, or try to engage people on the basis of broader themes and ideas?

Is it better to focus on aspirational targets for the future, or near-term concerns about employment and stability? This dovetails with number one, but it has its own dimensions that are worth exploring.

Some people felt that it was important to work with what we have, and improve the system in which our choices are being made. But others said that the status quo is the problem — and that the only way to fix it is to break it.

Building a consensus around the kind of future we want to build isn’t that difficult, especially when you stay at the level of broad and positive objectives that don’t require compromise. After all, who wouldn’t want to live in a future defined by a robust economy, a thriving environment, and fairness and justice for all? Deciding how we get there, and who should pay the highest price along the way, is where it gets messy. 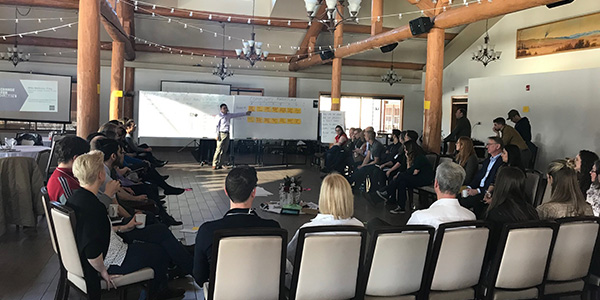 Sadly, there’s no way to resolve these conflicts in a way that leaves everyone satisfied and secure. That’s why we need to embrace the messiness that’s inherent here, and try to encourage others to join us in this space. As one fellow noted, there’s a literal physical disconnect between progressives and conservatives, and nowhere is that more apparent than when it comes to conversations about energy and climate. They worship in different places, socialize in different places, and often get educated in different places.

The EFL is one of the few places where they regularly come together and share competing ideas. One of the goals going forward should be to recreate this space in as many places and spaces as possible. It won’t automatically resolve those five tensions, but it would certainly go a long way towards understanding them better.